Instead of Greece we decided to make our way over to Italy. We got the train from Nice to Genoa so easily. The kids couldn’t believe there was no border control.

As I normally do I have used booking.com for our accommodation booking. I like the site as you can choose your rating and budget and read reviews on what others think. Booking online has gone smoothly and all accommodation has been what is says until today.

We arrived into Genoa at 8.25pm, it was dusk so everything looked a little eerie. Genoa is a city and like most cities it is dirty and crowded. Around Genoa Central Station is quite unique in that it has a lot of little lanes with loads of take away shops, cheap clothing shops and bag stores in them. The kids were a little apprehensive walking the streets trying to find our accommodation which was only 500m from the train station so not far at all. Any lane we walked past Master 12 would say ‘I hope we don’t have to go down there’. We walked and walked and came to the lane where we were staying. Yep a lane, much to Master 12’s disgust. The lane was dark and dingy with a lot of people loitering. 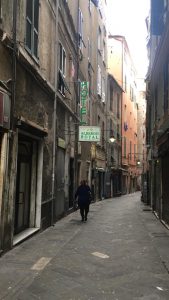 We all took a deep breathe to gear ourselves up to walk down such a dodgy looking lane.  We went to the address given but no sign – weird.  Police happened to walk past so we stopped them to get some help. They showed us to the address and yep where we were standing was in fact where we were staying. It was a door, a dodgy looking door, no sign, nothing.

We couldn’t figure out how to get into the door until out of no where one of the loiterers came up and pointed to a safety lock which would in turn hold the keys to allow us inside. A random guy then came up to help; he produced a skeleton key to open the box (dodgy). The policemen had a joke with him in Italian and pretended to punch him because clearly he was not supposed to have the key!

The police officer looked at us and said ‘no good’ he used his index finger and did a small turning circle, this would indicate the area is no good – eek!!! He did then go on to say it was ok for bag snatchers and ok for kids but there was a lot of drugs in the area….kind a better I guess. By this stage the kids were freaking out. We got inside, the kids had lost it, all apart from miss 5 who thought the whole thing was hilarious and it was funny that her brother and sister were in tears.

We were to stay on the fourth floor in apartment 7. Chris walked up to check in while I tried to console the kids. At every little noise their eyes would get wider and wider. We found the door, still no sign to make it obvious we were in the right place and can you believe the key didn’t work in the door!!!! I went on to try and nope it wouldn’t work. We buzzed and no answer.   All the while the kids just wanted to get out of there. Master 12 said we were the worst parents in the world….clearly not going to win any parenting awards for today.

We make a call to cut our losses (we had already paid) leave the lane and head for another hotel.

We found a lovely little hotel. It was only 3 star but honestly at that stage it felt like the most luxurious hotel we have ever stayed in!

We went to dinner at 10pm (obviously wine was involved after our traumatic start in Genoa) and the kids couldn’t stop talking about our experience. It was definitely something the kids will never forget.

Note to self, make sure you read reviews on the area before booking accommodation in the future!